The clients are keen gardeners so wanted a garden they could not only relax in, but also enjoy looking after. They wanted it to fit with the character of the house and also the rural location. The site was a very large, almost blank canvas, with complicated levels, heavy clay soil in the back garden and soil full of tree roots in the front and side gardens.

At the back, a steep bank led up to a large area of rough grass, looking onto fields beyond. This lent itself nicely to the planting of a range of meadow mixes with paths mown between them, leading to clearings where specimen trees were planted.

The bank itself was terraced with sleeper beds, incorporating steps to go from patio to meadow. Because the meadow mixes would be so colourful, we agreed the terracing would have only white-flowered plants.

Further round, we capitalised on the slope of the land to build a waterfall , ending in a pond where the existing house soakaway was at the bottom. The areas around this were planted up with marginal aquatics and architectural planting for year round interest such as Betula, Cornus and Rodgersia.

The heavy clay proved a challenge not just in terms of digging out the bank for the terracing and the waterfall, but because it shrinks and cracks when dry, causing movement, (not to mention sticking to your boots and the need to hose down the paving at the end of each day). Plants needed to be chosen to suit the widely varying conditions in the garden – from the heavy clay to very dry, acid soil beneath trees. The site also proved to be quite windy, despite being in a valley, so planting needed to be robust.

Landscaping work was carried out by Green Estate, with the meadow turf from Pictorial Meadows.

The existing small orchard was separated from the more formal garden by the installation of a specially commissioned ‘moon gate’, sited to frame an apple tree when viewed from the patio. Campbell Designs built and installed this.
Steps were built down the steep bank at the road side of the garden, with a meandering path along it, to allow access to the beds above and below it.

In the front garden, the clients wanted space for a patio set, so the existing paving was extended with a retaining wall built using reclaimed stone that was on site. This retains a bed running along the front of the house, which was planted with fragrant roses and cotton lavender.

The clients wanted to incorporate some box knot-work, so a circular knot was designed with a curved path leading from the drive, around the box knot to the patio. The clients had a number of half millstones, which were used to create the retaining ‘walls’ for the circular bound gravel path. 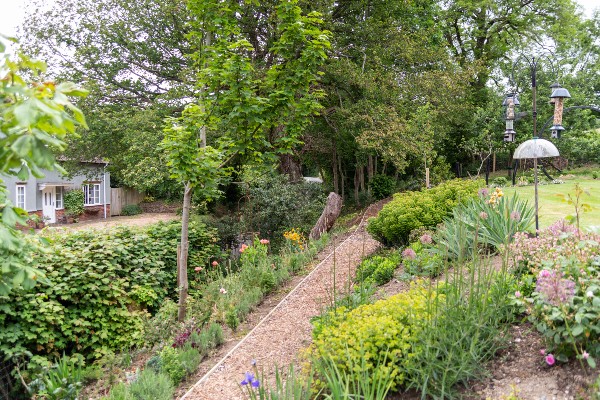 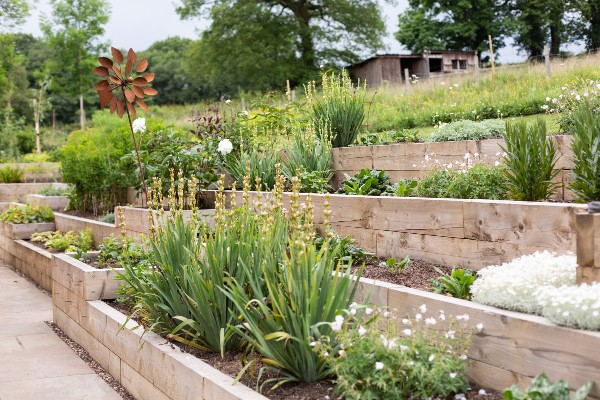 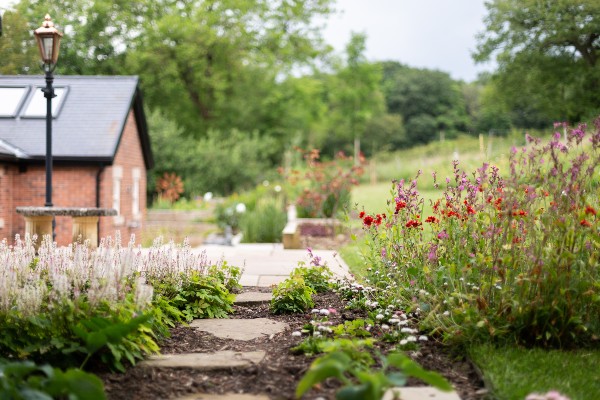 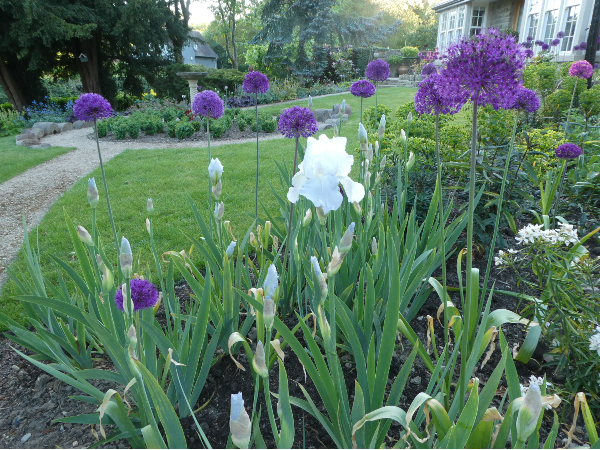 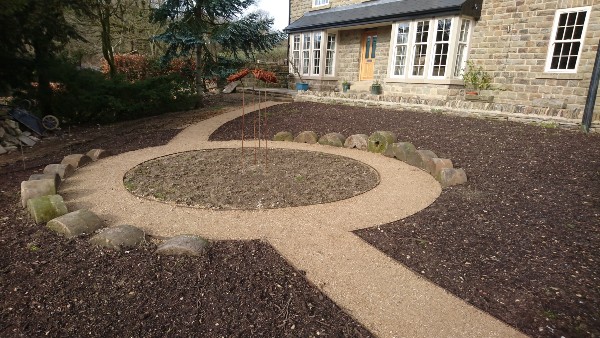 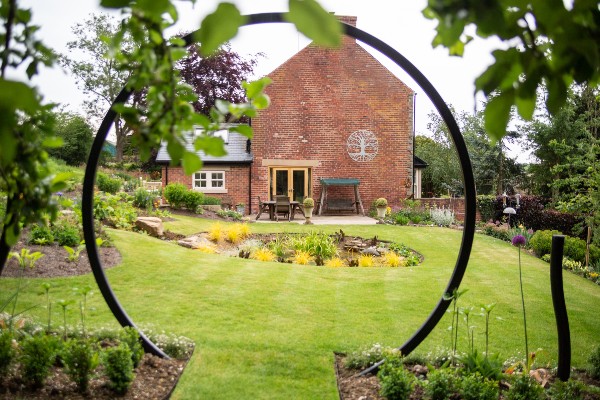 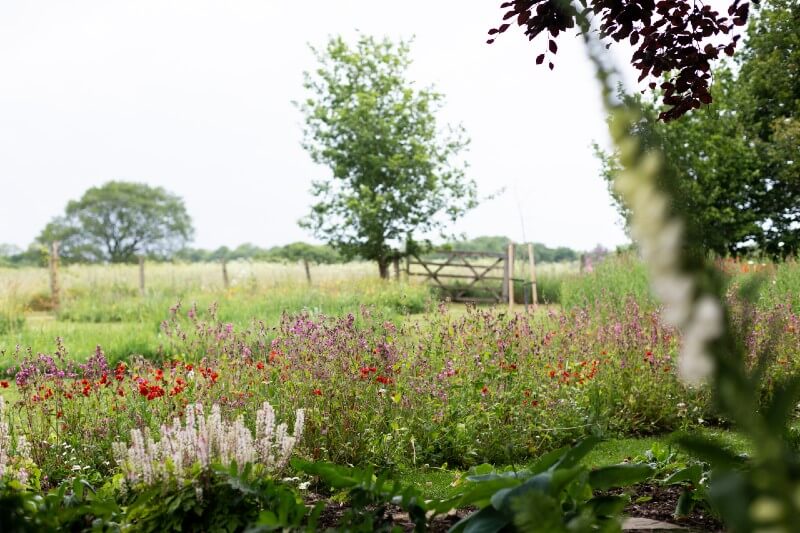 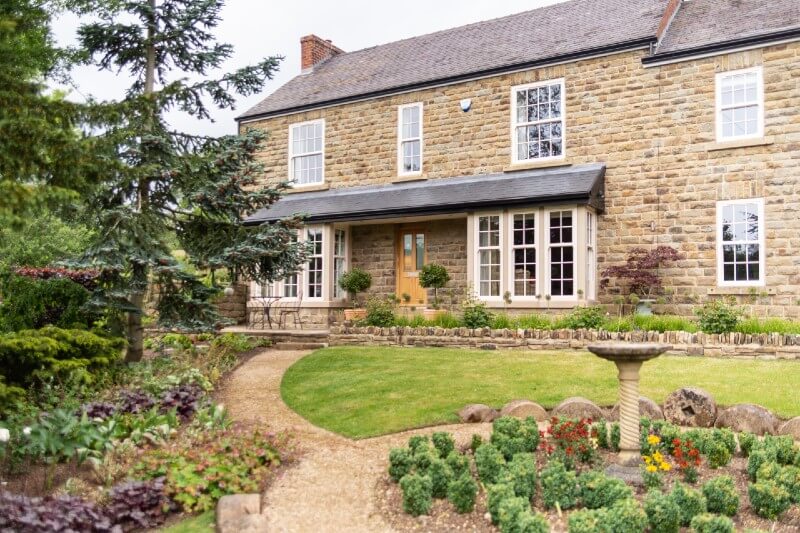 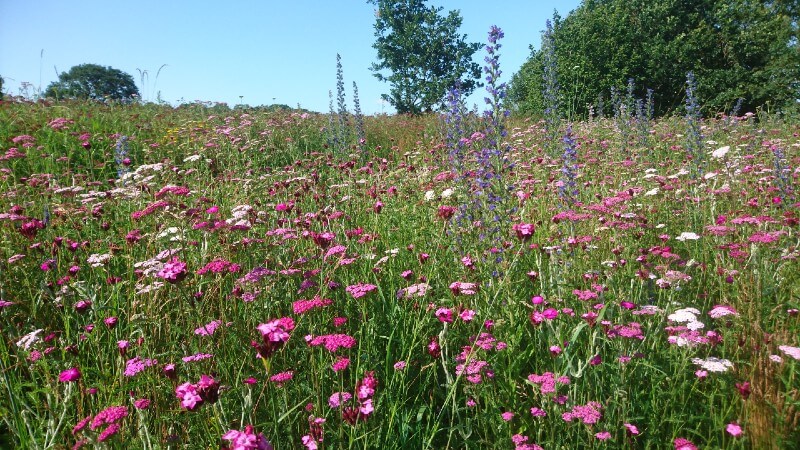 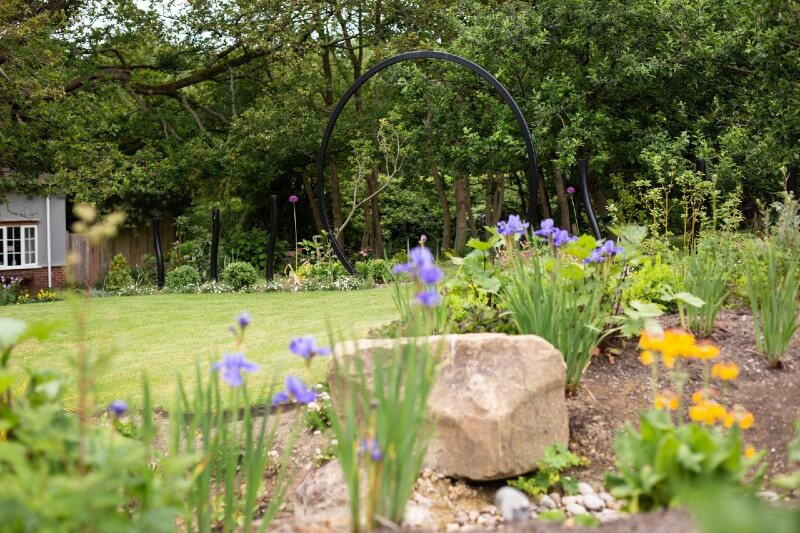 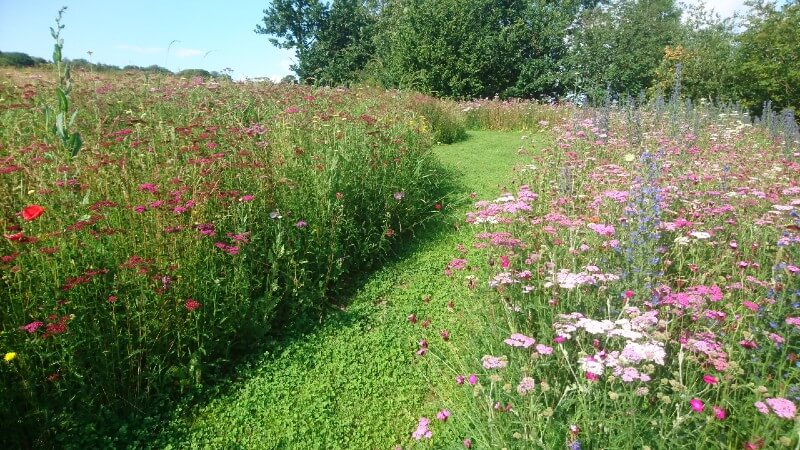 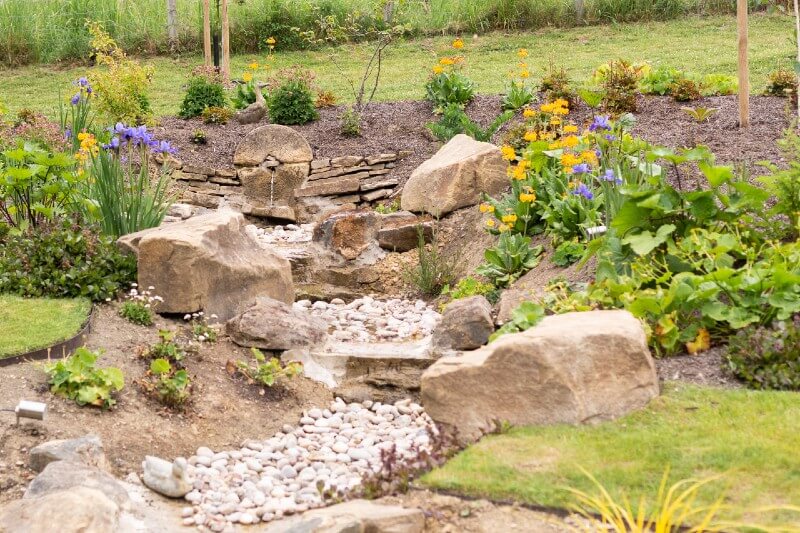 Helen designed and planted up our garden which until we bought the house had been very sadly neglected for years and as we had had building work done was also badly trampled down and in a sorry state. The garden is of a reasonable size, on a sloping site and backs on to open fields so all these points had to be taken into account in the design.

Helen was always very professional and friendly in all her dealings with us. She took on board our input and incorporated our thoughts into her designs but also came up with some innovative ideas, particularly with regard to the terracing of the rear garden so as to move the mass of the sloping bank away from the house. We had numerous meetings with her to ensure the design worked for us. Helen also worked well with the contractors we used to construct her design, when necessary.

Helen prepared the planting scheme for us and again incorporated all the plants we liked or where such plants were not suitable for our soil./site explained this to us and found a similar alternative which would suit the situation. Helen then went on to plant all the plants for us.

We are extremely pleased with both Helen’s design and planting scheme and also very impressed as to how well established the garden looked one year on from planting up.

We would not hesitate to recommend Helen.